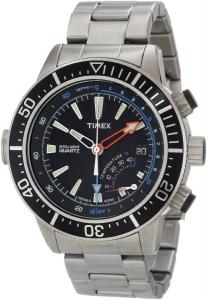 The Timex Men's T2N809DH IQ Adventure Series Watch is an excellent timepiece that should definitely be brought home to your collection. Featuring a black dial and a stainless steel band, this watch is the epitome of style and utility.