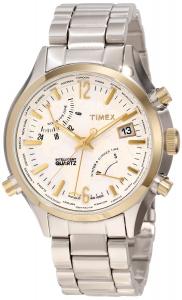 Upgrade to style and sophistication with this elegant Timex watch. Boasting a stunning 44mm stainless steel case matched with a secure stainless steel band, this timepiece makes an ideal accessory for any affair. The white dial sits under a mineral crystal, which combines a stylish look and an easy-to-read display. The sleek, subtle design instills this watch with an unmistakable sense of luxury that cannot be matched. Additional features include luminous, measures seconds and water resistant.