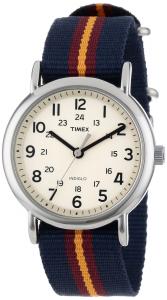 Taking cues from classic design, this Analog-quartz-powered Timex watch features a dramatic white dial, which is encased by a durable mineral dial window and embellished with contrasting black Arabic numerals for a stand-out effect. The blue band comes equipped with a sturdy buckle closure and provides a sleek edge. Other details include a 38mm case and a silver stainless steel bezel. With its combination of classic lines and modern touches, this casual timepiece makes a handy everyday accessory.