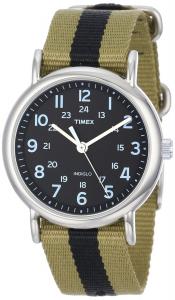 Weekender Slip ThruDesigned for men and women of all ages who are seeking a fashionable, affordable, casual watch that will stay in style for many seasons. The Timex Weekender collection is the ideal accessory for a sophisticated, casual look.Features: INDIGLO Night-Light Water-Resistant to 30 meters Blue Nylon Slip-Thru Strap 24 Hour Time Logging Capability NONE Motion Detection (GPS/Accelerometer) NONE Screen Size NONE Speed NONE