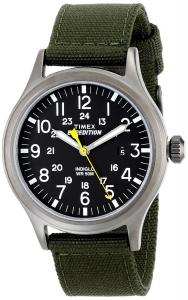 Expedition ScoutA watch as rugged and stylish as you are. This classic outdoor watch features easy-to-read luminescent hands and markers, a durable strap and is water resistant up to 50 meters.Features: INDIGLO Night-Light QuickDate Feature Water-Resistant to 50 meters Mineral Glass Crystal Comfortable and Durable Nylon Strap Logging Capability NONE Motion Detection (GPS/Accelerometer) NONE Screen Size NONE Speed NONE