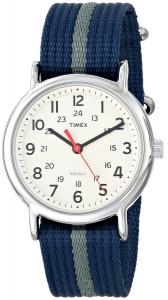 The Timex Unisex Weekender Blue and Gray Slip-Thru Strap Watch offers casual, yet fashionable styling for the relaxed lifestyle. The blue slip-thru strap with gray stripe makes this an ideal accessory for any wardrobe. The 24-hour time and Indiglo® night-light make this timepiece truly unique. The dial is protected by a mineral crystal, which covers the luminous hands powered by analog quartz movement. A relaxed style featuring the Timex tradition of quality craftsmanship, this watch is the everyday timepiece you have been waiting for.