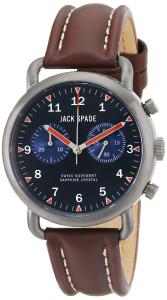 JACK SPADE was founded in 1996 in a loft on Warren Street with the idea that useful items could be both utilitarian and stylish. Living in downtown Manhattan, with space at a premium, everything we owned needed to serve a purpose – or even better, multiple purposes. We couldn’t find the kinds of products we had in mind. So we decided to make them.

We began with bags. They were fashionable and functional, designed for city life but appreciated by men everywhere who refuse to choose between something that looks good and works well. Accessories followed. Then a full line of clothing. We soon outgrew the loft on Warren Street, but we still challenge ourselves today to create the kinds of simple, iconic products that would make sense there.

Then there’s the matter of our name. There is no Jack Spade at JACK SPADE. There never has been. Instead, we were inspired by two of our idols – Beat novelist Jack Kerouac and business titan Jack Welch – to build a company where art and commerce could comfortably co-exist. JACK SPADE is named in their honor.