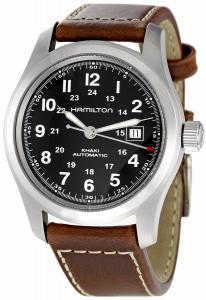 The Hamilton story is a 120-year road that meanders from Lancaster in the United States to Biel, Switzerland, the world capital of watchmaking. Today, Hamilton is known worldwide thanks to its pioneering role in the worlds of aviation, cinema, as well as electric and digital technology. Hamilton watches have singular shapes that exhibit a perfect pairing of personality and design, which combine American spirit with Swiss ingenuity.

Hamilton was founded in Lancaster, Pennsylvania. Its first collection of pocket watches, the Broadway Limited, was known as "The Watch of Railroad Accuracy."

In 1914, Hamilton was further thrust onto the national scene when it was chosen to be the official watch supplier of the U.S. Armed Forces. In the late teens and early '20s, pioneer pilots of the era trusted the Hamilton brand for its precision and accuracy and it became the official watch of many airlines in the 1930s.

Hamilton watches could be seen on the silver screen throughout the '60s and '70s, most notably a Hamilton Ventura was worn by Elvis Presley in the film, Blue Hawaii.

Today, Hamilton watches are synonymous with iconic style, as they continue to grace our lives through some of our favorite movies. Hamilton watches can be seen in such films as Men In Black, Lethal Weapon 4, Fight Club, and Independence Day.