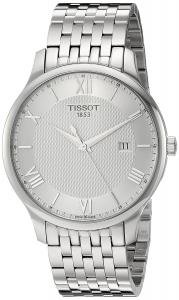 Every modern man needs a timepiece in his wardrobe. Keep time fashionably with this silver watch made by Tissot and heavily discounted from the retail price. We take all our own photos to present you with realistic and vivid detail. Band Length: 7 in. | Water Resistance: 99 feet | Display: Analog | Closure: single-locking-fold-over | Shape: Round Item SKU: T0636101103800