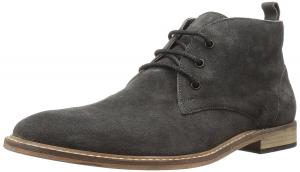 Ingenuity goes a long way toward compensating for lack of capital, an axiom Kenneth Cole proved back in the early 1980s when he launched his fledgling shoe store out of a borrowed truck parked along a fashionable Midtown Manhattan street. Gaining a parking permit required a clever ruse. Cole added the word "Productions" to his company name, reinvented himself as a film director, hired models as "actors," and got a license to shoot a film appropriately titled The Birth of a Shoe Store. Kenneth Cole Productions, Inc. (the tongue-in-cheek name remains to this day) may not have produced much actual film that day, but it did sell an impressive number of shoes. Today, Kenneth Cole Reaction blends fabulous fashion with functionality, creating urban-inspired footwear for work or play.