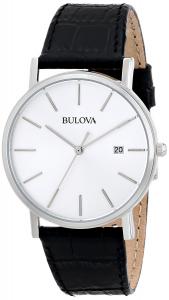 The classic clean look of the Bulova Men's Strap Silver Dial Watch is ideal for a man who is moving up in the world and wants to look good doing it. The white circle dial displays silver stick indices for hours. A sub-dial at three o'clock shows the date. The bezel and case are silver stainless steel. This watch looks good at the office or at a power lunch. The black leather band is textured for detail and stays comfortable and secure with a traditional buckle clasp. This Bulova timepiece has precision three-hand Japanese quartz movement. It is presented in a black gift box and is water resistant to 99 feet (30 meters).